THE EYE – OUR KEENEST SENSORY ORGAN!

For most people, the eyes are the most important sensory organ and means of communication with the outside world. However, many patients only realise how much they value their eyesight when it deteriorates – or is even lost. As a result of demographic trends that have led to an ageing population, diseases of the eye have now become widespread.

The seven most common eye diseases are: cataract, diabetic retinopathy, age-related macular degeneration, glaucoma, retinopathy pigmentosa, retinal detachment and dry eye.
Many of these eye diseases have been classified as incurable and only treatable to a limited extent. Preventative measures are thus becoming increasingly important (marked blue). The global market in targeted nutritional supplements is developing accordingly: 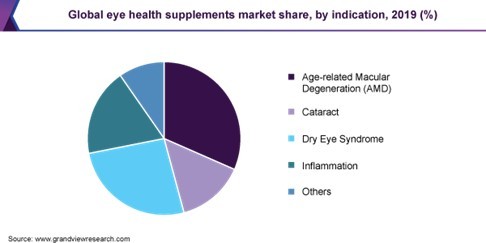 For it’s well known that nutrition is of key importance in the maintenance of every bodily function. From today’s perspective, food has a dual function in this process: it is not only aimed at preventing nutrient deficiencies (nutrition’s “traditional” function), but it should also ensure the long-term health of the organism and prevent nutrition-associated diseases. Unfortunately, the concentration of nutrients in our food is decreasing to an increasing extent, and malnutrition is also on the rise, meaning essential components must be augmented via supplementation.
Against this background, it’s not surprising that not only typical nutrients such as vitamin A are of interest with regard to eye function, but also substances that are thought to have wider significance for the maintenance of eye health. Generally speaking – when referring to corresponding supplementation colloquially – you speak of “EYE VITAMINS” that can have various formulations.

Based on extensive studies, nutrients have been carefully formulated to support eye metabolism and function. Micronutrients play a key role in eye function and health. This is where the carotenoids lutein, astaxanthin and zeaxanthin, vitamins A / C / E, the trace elements Zn / Cu, the Ω3 fatty acids (docosahexaenoic acid) and micronutrients such as resveratrol and anthocyanidins (from blueberries) are of primary importance. An appropriate supply of nutrients can contribute significantly to supporting normal visual function. However, older people in particular often don’t get enough of these substances via their diet.

Lutein and zeaxanthin can selectively accumulate in the retina’s so-called macula lutea (yellow spot) with an adequate diet or appropriate dietary supplements. Both xanthophylls are found predominantly in the following types of vegetables:

As a raw material for nutritional supplements, lutein and zeaxanthin are extracted from the yellow petals of the marigold, Tagetes erecta. As ”natural sunglasses”, lutein and zeaxanthin filter out the harmful, high-energy components of blue light.
They are also able, as antioxidants, to deactivate free radicals. Lutein and zeaxanthin are used up over time and cannot be produced by the body itself. For this reason, a regular intake is recommended as this can lead to accumulation in the retina and protection for the delicate macula.
The macula is located in the centre of the retina and forms the point of sharpest vision. Here, the carotenoids lutein and zeaxanthin occur naturally in high concentrations as macular pigment, which is why this spot is also called the “yellow spot”.
The task of the macular pigment is to protect the retina from the harmful components of blue light. High light energy can be a severe strain on the photoreceptors. In many people, the protective layer of the macular pigment decreases after the age of
40.
The factors already mentioned in the previous paragraph can accelerate this process.
Low macular pigment density (MPOD), owing for instance to an insufficient supply of nutrients such as lutein and zeaxanthin, can be one of the causes of age-related macular degeneration (AMD).
This is a gradual and painless process that initially only reveals itself in small changes. A difficulty in reading, jumping or missing letters and distortion might be dismissed as “normal signs of ageing” – until reading becomes impossible and faces are no longer able to be recognised.
Under certain circumstances, these ageing processes in the eye can be slowed down. These include, for example, external protection from UV rays by wearing sunglasses with a high sun protection factor as well as an adequate supply of carotenoids.

Astaxanthin is also a carotenoid that occurs as an antioxidant in the eye area – in the cones (photoreceptors) of the fovea. It acts as a natural cell protector and can protect the skin and eyes from the effects of excessive UV exposure. Other carotenoids, such as beta-carotene, are not stored there and thus play no role in the function of the macula lutea. 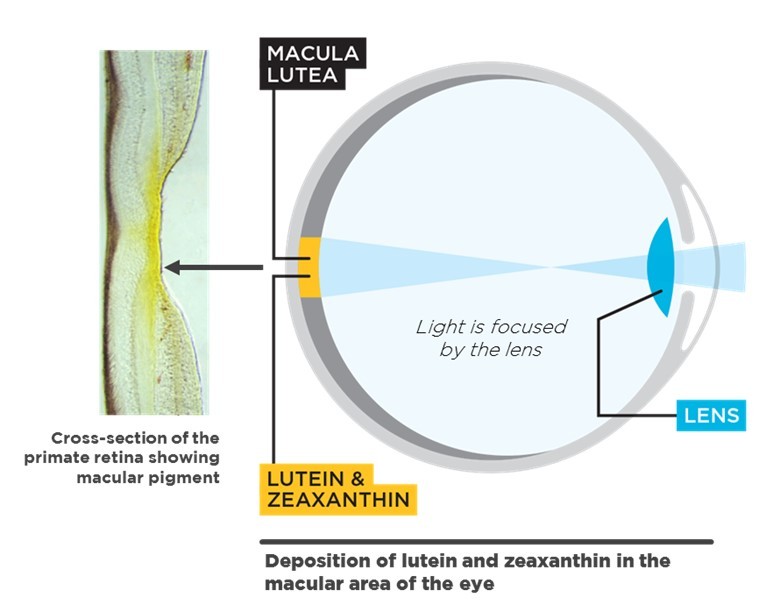 Resveratrol, an oligomeric procyanidin (OPC) with very good antioxidant properties, can protect the eyes from age-related damage (AMD), damage due to diabetes (diabetic retinopathy) and phototoxic influences. This is the outcome of a study published in 2017.
Grapes, but also raspberries, mulberries, plums and nuts contain the substance resveratrol in their skins. It protects plants from fungi and bacteria. Experts believe that resveratrol inhibits arteriosclerosis and the formation of diseased blood vessels in humans. Wildly proliferating blood vessels develop in diabetic retinal disease and the wet form of age-related macular degeneration.

As a component of visual purple, vitamin A is essential for the visual process. In humans and in most vertebrate eyes, the rhodopsin in the rods of the retina is responsible for light-dark vision at low brightness.

Zn controls the function of more than 200 enzymes in the body, which are involved in almost all important cell reactions. Probably the best-known property of zinc is that it strengthens the body’s defences. However, it is also considered to be of great importance for maintaining eye health. During the normal visual process, free radicals are produced. In order to be able to break these down, the body has its own “protective system” consisting of vitamins C and E as well as the trace element zinc.

“EYE VITAMINS” are carefully formulated to nourish the eyes and support their natural protective functions. The basis for this is a wide range of clinical studies that have been carried out primarily on AMD patients.
„EYE VITAMINS“ can lead to an accumulation in the macular pigments – on account of their balanced concentration of the carotenoids lutein and zeaxanthin. Together with vitamin A, they can thus contribute to the maintenance of normal vision.

Macular pigment density (MPOD) depends on nutrient supply and can be increased by a diet rich in lutein and zeaxanthin. The human body cannot synthesise these xanthophylls, thus we’re dependent on their ingestion. Appropriate foods include vegetables such as kale, spinach, broccoli, lamb’s lettuce and corn (see table). However, these amounts are often too low to support healthy visual function. Achieving a higher intake via dietary means is thus only possible to a limited extent.

For whom is supplementation with “EYE VITAMINS” suitable?
• people between 30 – 70 years of age, especially women
• people with light skin and light eye colour
• people who use computers or smartphones intensively
• drivers who drive frequently during twilight or at night
• athletes who rely on precise vision – as well as e-sports participants
• people who spend a lot of time outdoors

For most people, vision is something taken for granted in order to cope with various daily tasks and challenges. Spending long periods of time in front of objects at close distances, such as monitors or smartphones, can be partly responsible for progressive myopia. These devices’ blue light – as well as direct sunlight – are stressful for our retina. An unbalanced diet, excessive alcohol consumption and nicotine can also damage our eyes. The nutrients in “EYE VITAMINS” are carefully formulated to support the metabolism of your eyes and their functions.

Amsler test
You can test yourself for possible macular degeneration using this simple test. To do so, look with one eye at the point in the centre of the grid from a normal reading distance (approx. 30 cm). Pay attention to all the lines of the grid. If they appear distorted, blurred or out of focus, see your ophthalmologist. 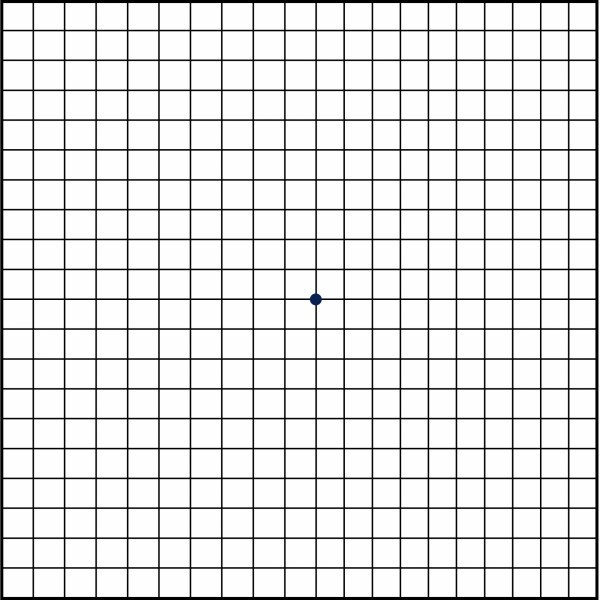